Mediation on the rise 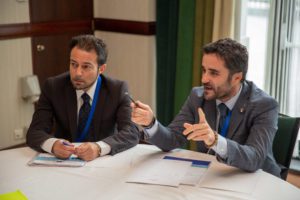 The number of commercial mediations rose by a fifth last year and £11.5 billion worth of claims were handled, an audit has found. London’s Centre for Dispute Resolution, which conducted the audit, said that 12,000 commercial mediations – excluding those involving small claims – were conducted in 2017. That was 20 per cent more than the previous 12 months.

At the same time, fees have fallen. However, with an increase of 20% what better time to train as a mediator? ProMediate is offering its expert mediator training course to all from October 2018 in Manchester followed by further opportunities in March and June next year. The course will have a business focus and include training in online and Telephone Mediation. Mediators conducting 20 mediations per annum can earn up to £68,000.

The key finding from the 2018 CEDR Mediation Audit is that 12,000 commercial mediations (excluding small claims mediations) were performed in the last 12 months, an increase of 20% on 2016.

The biennial audit shows that in the last 12 months £11.5 billion worth of commercial claims were mediated and that through mediation this year businesses will save £3 billion in wasted management time, damaged relationships, lost productivity and legal fees. As a profession, Mediators and Service Providers in the last year earned £30 million giving a 100:1 return on investment for the UK economy.

The Audit received 336 eligible responses from practicing mediators and was conducted alongside a survey of lawyers who use mediation, giving a useful client perspective. The Audit is made possible through collaboration with the Civil Mediation Council. This 2018 Audit was conducted in partnership with the International Institute for Conflict Prevention and Resolution (CPR) who added international mediators to the survey so a transatlantic mediation audit report will be published in September 2018.

Some of the key findings from the UK Audit are as follows: