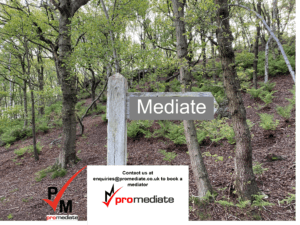 The Ministry of Justice recently held a consultation on whether mediation and ADR should be made compulsory. A report from the Civil Justice Council, and the Master of the Rolls, a top judge who is enthusiastic about mediation, suggested this would be lawful (although the Law Society is sceptical)

An illustration of the problem was highlighted recently in the Law Society Gazette. It reported that:

A judge had criticised the parties and their lawyers in divorce proceedings for what he described as an ‘almost complete breakdown of constructive communication’.

The judge noted ‘with dismay’ that the divorcing husband and wife have made 41 statements between them and the case has stretched to 34 hearings. The bundles exceed 6,000 pages, Peel J explained, as the parties have argued ‘almost every imaginable issue, no matter how trivial’.

The total costs incurred come to £2.3m (split between £1.4m for the wife and around £900,000 for the husband. Given the couple’s net assets come to around £1.75m, the judge said his task now was to concentrate on how to divide the debts fairly.

As a last word, he added: ‘The only beneficiaries of this nihilistic litigation have been the specialist and high-quality lawyers. The main losers are probably the children who, quite apart from the emotional pain of seeing their parents involved in such bitter proceedings, will be deprived of monies which I am sure their parents would otherwise have wanted them to benefit from in due course.’

It is clear that the parties should have mediated. Mediation is equally as effective in the family sphere as the civil sphere, as demonstrated by the cases which are resolved through the process in Court, but there is still a long way to go in terms of reducing the number of cases which go through to a final financial remedy hearing. The legal costs can be ruinous as testified by the cases which regularly appear in the Daily Mail and the press generally.

The MOJ invested in mediation recently, introducing a £1m voucher scheme to steer eligible families towards mediation. The scheme was topped up with a further £800,000 in the summer. This was a vote of confidence from the MOJ which would not spend this money unless the results were positive. There is also a free mediation service for civil small claims and parties get directed to use it if their case is worth less than £500.

The Lord Chancellor Dominic Raab appears to be keen on mediation, telling the Conservative party conference that too many civil cases were going to court and he wanted to see alternative dispute resolution used more.

The plans being drawn up apparently include making mediation the default option in most family law disputes and making it easier to award legal costs against the parent thought to be being unreasonable.

It makes sense to make the parties try ADR as soon as possible, as long as there has been full financial disclosure and a pension or property valuation report if necessary. The Lord Chancellor has apparently commissioned proposals to resolve 50% of family finance cases by mediation.

There is an issue as to how couples can pay for advice which can help lead to a settlement, but there are organisations like Amicable, out there who work for both parties to try to come to a mutually satisfactory outcome for them both as opposed to adopting an adversarial position.

Mediators trained in family law can also help the parties understand where a reasonable settlement lies, or an early neutral evaluation is the other option.

Overall it is likely that we will see more compulsion to use ADR in the civil and family law arenas. Court proceedings are simply too costly and stressful. A good settlement is better than a good lawsuit, to quote Abraham Lincoln.