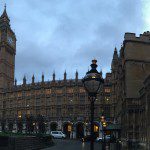 The EU referendum is turning friend against friend. What could only be described as a workplace dispute has arisen between the Prime Minister, the Lord Chancellor and Boris Johnson. An inadvertent tweet has also turned the Labour Party against McBride. Perhaps this is because politicians are finding themselves in bed with strange bedfellows, such as Nigel Farage. If the UK inadvisadly votes for Brexit then mediation will be required between the remaining EU states and their new found outsider. The Prime Minister has said that the leave campaign, including the Lord Chancellor, are telling untruths. Surely in that situation, the Lord Chancellor, Gove’s, position is untenable. How can the Minister for Justice be allowed to continue if he is a liar!?

News also that Mohammed Ali’s death may lead to a dispute over his fortune, reinforcing the view that where there is a will, there is a dispute. Let’s hope that his good name is not besmirched by family infighting and that his relatives will engage the services of a good mediator!