Whilst some retailers and law firms are rightly embracing the ADR Directive, alternative dispute resolution, and agreeing to mediate their disputes, some large retailers are failing to do so and are treading a fine line in relation to compliance and risking reputation all damage. They are also passing up on an opportunity to save costs and aggravation, retain customers and improve customer relations, through conciliation and mediation.

For example, Currys PC World (DG Retail) fail to name a certified ADR Provider. Quite why they don’t want to save costs and resolve complaints is strange. It is only a matter of time before enforcement follows. ADR also makes sense as the case of Durkin v DSG demonstrates where a consumer had to go to the Supreme Court over his laptop. This is what appears on the DSG website: 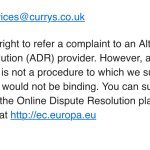 Other companies like M&S and the Co-op provide information about an ADR entity but refuse to use it. The following is on the Co-op legal services website: 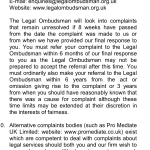 This means that they also won’t use the ODR Platform, making a mockery of attempts to change attitudes towards ADR. It is not just retailers who are doing this. Law firms are also saying that they don’t use ADR and only refer to the Legal Ombudsman. This cannot be allowed to continue and when the regulations are reviewed there will be pressure from frustrated consumers to make engagement compulsory. In the meantime there is a risk that the ADR market will simply collapse when  renewal takes place. The ADR entities have invested a considerable amount of time and money to support businesses in providing ADR for consumer disputes but if retailers will not try to use it there is no future for it in this arena.