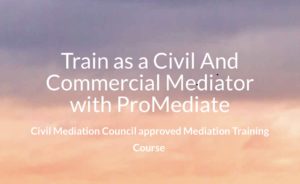 We have a complaints and Appeals Process as follows:

We take complaints seriously and have a full appeals system

PM welcomes feedback and we take this both formally and informally, as well as having our courses reviewed externally by the CMC.

We use the Civil Mediation Council Complaints Resolution Service:

We are a certified ADR Provider and are therefore willing to use the ODR Platform http/ec.europa.eu.o

If possible, we believe it is best to deal with things straight away rather than try to sort them out later. If you have a concern, raise it with the person you’re dealing with. He or she will try to resolve it for you there and then. If there are any lessons to learn from addressing your concern then the member of staff will draw them to our attention. If the member of staff can’t help, they will explain why and you can then ask for a formal investigation.

If we are unable to resolve the complaint then Complaints can be made to the Civil Mediation Council or through the EU ODR Platform, as above.

1.2 The appeals process is available to delegates on courses run by ProMediate..

2.1 Delegates have the right to appeal to the ProMediate Assessment and Examination Appeals Committee for a review of a final decision of the PM of Mediation Assessor decisions on assessment, and examination and course Certification.

2.2 This applies to the following decisions:

(a) Appeal against the failure to achieve a safe and competent grade in the Assessment phase;

(b) Appeal against the failure to achieve the minimum pass mark in the written Examination;

(c) Appeal against the mark awarded in the Examination;

2.3 This includes appeals against a requirement to take reassessments.

2.4 An appeal may only be submitted in relation to the final decision of the Assessors and/or the Examiner.

2.5 Appeals will only be considered if submitted within one calendar month of the delegate receiving notification of the decision they wish to appeal against.

2.6 Only written requests for Appeal presented clearly and comprehensibly will be accepted.

2.7 There may be times when a delegate submits an appeal, the subject of which is actually a complaint, or vice versa.  In these cases, PM may decide to reclassify the appeal or complaint, at whatever stage of the procedure that has been reached, and PM will inform the delegate of this.

2.8 If it is clear the circumstances claimed by the delegate do not constitute sufficient grounds for an appeal, the case will be rejected immediately. This includes instances where:

(a) the student has provided no substantial, relevant evidence of a procedural irregularity or of prejudice.

(b) the procedural irregularity claimed by the delegate clearly could not have affected the decision against which the Appeal is being made to an extent that would have led to a different decision.

2.9 Where it is believed that there may be grounds to Appeal, an investigation will be conducted.

2.11 If the Panel member of PM believes that the case is insufficient and therefore bound to fail, the appeal will be rejected

2.12 Where a case is rejected, the reasons for the decision will be conveyed by letter to the delegate. This will not prevent the delegate from submitting a revised case within one calendar month of receiving notification of the outcome of their Appeal if the delegate has new evidence to make known.

3.1 It is for the delegate to establish their case and only claims of one of the following circumstances will be considered as grounds for appeal:

(a) That parts of the documented assessment procedure were not applied and that this procedural irregularity which has disadvantaged the delegate was significant enough to have materially affected the decision/recommendation made, rendering it unsound.

(c) That prejudice or bias on the part of one or more of the Assessors or Examiner took place and can be proven (evidence must accompany the submission).

3.2 The following circumstances will not be considered grounds for appeal:

(a) Perceived past shortcomings in tuition, supervision or support not previously raised with PM cannot be considered as grounds for appeal.  Concerns relating to the quality of teaching or supervision, or other circumstances that relate to the delivery of a course before the commencement of assessment or the submission of the written Examination should be raised under the Complaints Policy as they arise.

(b) An Appeal may not be made to question the academic judgement of the PM Examination Moderators, and the delegate will not be permitted to argue the academic merits of his/her work. The student’s feeling that the result unfairly reflects the merit of their work or their ability is not a ground of appeal.

(c) An Appeal may not be made against the actual mark awarded for the assessment, which is a matter of academic judgement, except where the case rests on a claim of procedural irregularity. If a delegate wishes to have clarification about a mark received for an individual assessment they are advised to raise this at the time with the Assessor or Examiner at the time that debrief is provided.

(d) A delegate who has submitted an extenuating circumstances claim to PM and is dissatisfied with the outcome should use the Complaints Procedure.

4. Oversight of the Process

4.1 The procedure is managed by the Directors of ProMediate.

5.1 There is no right to Appeal the decision of the Appeal Process.