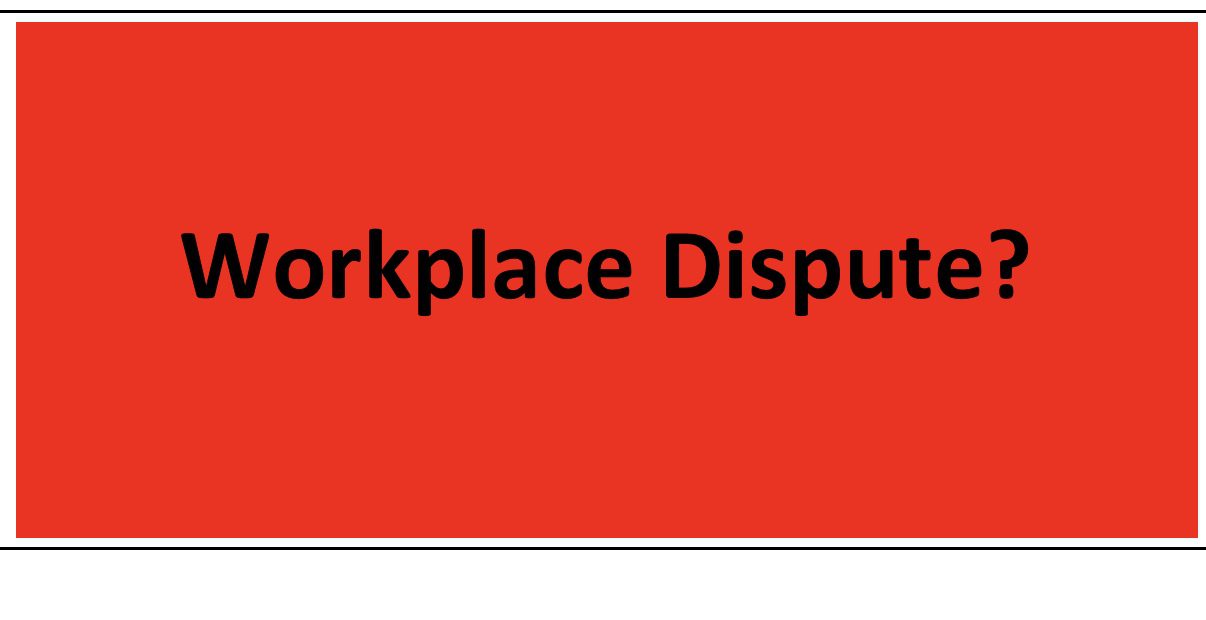 The following information is intended to collate all the relevant links to help people interested in mediating employment disputes.

ProMediate does provide mediation in employment and workplace disputes.

Employers can save wasted time and retention costs if they resolve disputes in the workplace at an early stage.

Tribunal claims increased in the quarter to September 2019:  Single Employment Tribunal (ET) receipts, disposals and caseload outstanding all increased, by 38%, 4% and 40% respectively, compared to a 2018.

The increase may have been caused by the reduction in Tribunal fees. In any event, mediation can help avoid tribunal claims which are estimated to cost at least £8500 in Legal fees alone per tribunal case.

The CBI (Confederation of British Industry) estimates that conflict in the work-place costs UK business £33 billion per year, taking up 20% of leadership time and potentially losing up to 370 million working days.

A link to our mediators can be found here: 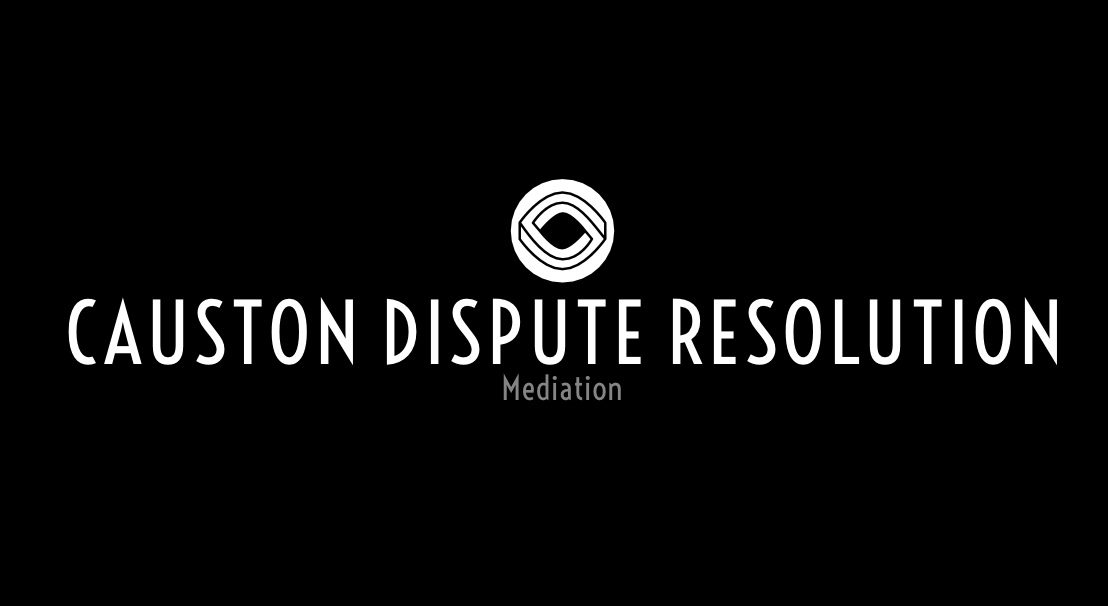 CIPD published a paper in 2015

which said as follows:

In 2007, the Gibbons Review of the UK’s system of dispute resolution recommended workplace mediation as a way of encouraging early resolution of individual employment disputes.

As a consequence, the Acas Code of Practice was revised in 2009 to include a reference to the benefits of mediation. Additionally, in the context of rising employment tribunal volumes, the Government enthusiastically endorsed the use of mediation and perhaps most strikingly argued that ‘a significant growth in mediation of workplace disputes has the potential to lead to a major and dramatic shift in the culture of employment relations’ (BIS 2011, p13).

Since then, there is some evidence that mediation has increased, although it is far from becoming ‘embedded in the culture of conflict handling’ in most UK workplaces.

The Workplace Employment Relations Survey 2011 found that 17% of workplaces that had formal employee grievances had used mediation.

Moreover, the use of in-house and external mediation increased by 24% and 32% respectively. At the same time, almost four in ten organisations had expanded their development and use of mediation skills (CIPD 2015, p14).

Typically, the case for mediation has been driven by efficiency claims, and there is consistent evidence that it provides a relatively cheap, fast and successful way of resolving certain types of disputes, particularly when compared with grievance and disciplinary procedures and litigation.

The key advantages and challenges were set out by CIPD in the following table: 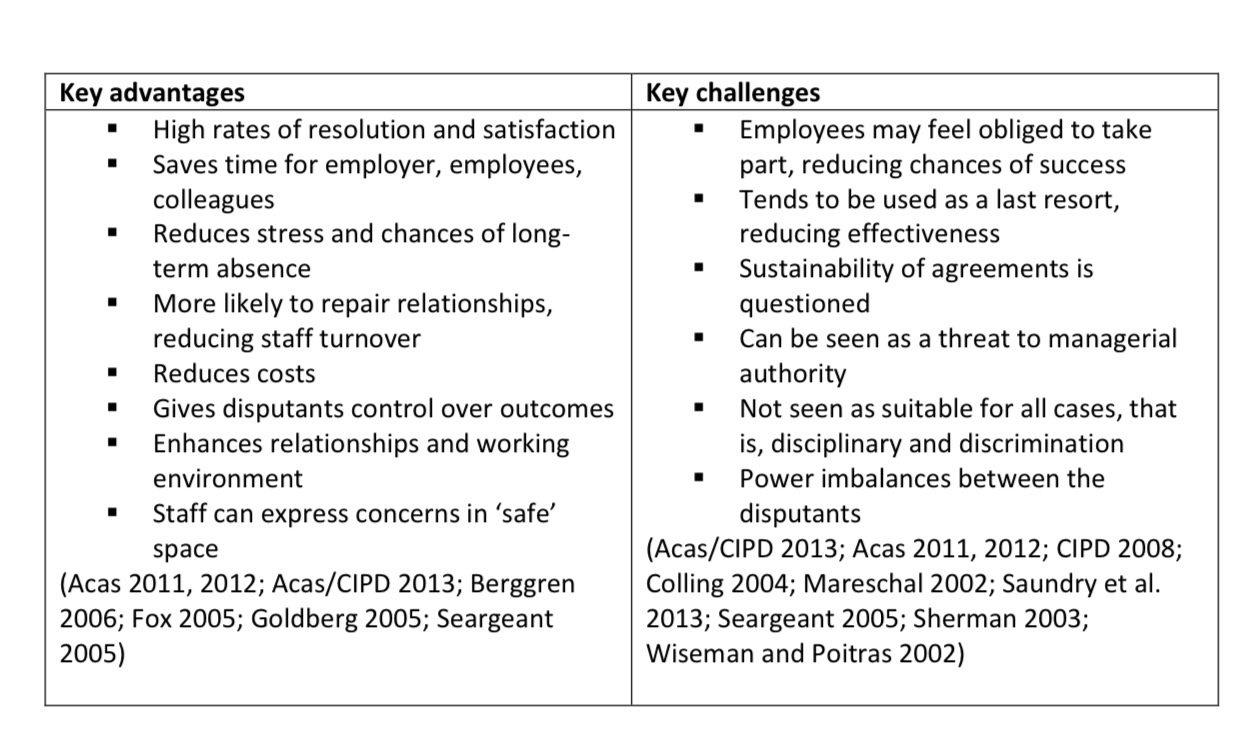 To date, mediation has mainly been promoted on the basis of its efficiency advantages over conventional grievance and disciplinary procedures. Mediation can be organised relatively quickly and does not require input from managers, representatives or witnesses. It is also likely to result in a positive agreement, although the sustainability of settlements is more difficult to evidence. Consequently it can also reduce the costs of long-term absence, staff turnover and litigation (Latreille and Saundry 2014).

There is also substantial evidence of the positive impacts on the conflict resolution skills of those who are trained as mediators and those who take part in mediation, particularly managers (Latreille and Saundry 2014).

The case studies discussed above suggest that the development of in-house mediation schemes can shape organisational approaches to conflict management; however, this is more likely where it is part of strategic intervention that recognises the importance of early and proactive conflict resolution. In addition, the impact of mediation will be greater when key staff from across the organisation are actively involved. Recruiting influential managers, HR and employee representatives to co-ordinate and carry out mediations can enhance understanding and provide an environment in which high-trust relationships between the parties can be developed, encouraging more informal resolution generally. It is important to note that in all three organisations, mediation provided a quicker, cheaper and, for some issues, a more effective response to individual disputes than conventional process and procedure. However, if mediation is simply seen as ‘another HR tool’, its potential to contribute to improved employment relations is unlikely to be unlocked.

“Mediation is a completely voluntary and confidential form of resolving workplace disputes between people.

It involves an independent, impartial person helping two or more individuals or groups reach a solution to a workplace dispute that’s acceptable to everyone.

Mediators do not make judgments or determine outcomes – they ask questions that help to uncover underlying problems, assist the parties to understand the issues and help them to clarify the options for resolving their difference or dispute.

The overriding aim of workplace mediation is to restore and maintain the employment relationship wherever possible. This means the focus is on working together to go forward, not determining who was right or wrong in the past.

Many kinds of dispute can be mediated if those involved want to find a way forward. It can be used at any stage in a dispute but is most effective before positions become entrenched. Employers might want to think about writing a mediation stage into their individual grievance procedure.”

CIPD’s guide can be downloaded here:

The government page on workplace mediation can be found here:

We also very much recommend using the following providers: