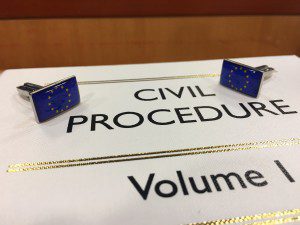 The EU has published the outcome of a workshop held on 26 November 2016. It suggests that one way of increasing the uptake of mediation would be compulsory reference to mediation before Court proceedings. They see a successful balance as being 50/50 between Court and mediation.

In this report they look at how the Mediation Directive is working and the balance between Court proceedings and mediation.

They report that there is no doubt that the 2008 Mediation Directive has been a major milestone in the European mediation movement. There is also no doubt, however, on the basis of the methodology proposed, that the key goals of the Directive remain far from being achieved.

Indeed, the intention behind the Directive was to encourage more people and businesses to use mediation and to establish a balanced relationship between mediation and judicial proceedings. Eight and a half years after the adoption of the Directive, as all available statistics confirm, in the majority of the Member States mediation is on average still used in less than 1% of the cases in court: 1 mediation for each 100 cases in court. The only exception is the result of the Required Initial Mediation Session used in Italy in a small portion of civil cases, which is emerging as a best practice. There appear to be two main options to reach a balanced relationship between mediation and judicial proceedings.

The first and most effective of these options would be to strengthen Article 5(2) of the Directive by requiring, not just allowing to require, the parties to go through an initial mediation session with a mediator before a dispute can be filed with the courts in all new civil and commercial cases, including certain family and labour disputes where the parties’ rights are fully disposable. This has been shown to have a significant impact in achieving a balanced relationship between mediation and judicial proceedings.

The CJEU’s Alassini1 case establishes clear guidelines for required elements in ADR at the EU level. A proposed rewrite of article 5(2) could read as follows: “Member States shall ensure that a mediation session is integrated into the judicial process for civil and commercial cases, except for such cases as Member States shall determine are not suitable for mediation. The minimum requirements for such a mediation session are that the parties must meet together with a mediator, subject to the condition that the procedure shall be non-binding and swift, suspend the period for time-barring of claims, and be free of charge or of limited cost if any party decides to opt out at the initial session.”

If these recommendations are introduced and we stay a part of the single market, this could result in increased use of mediation in the UK.